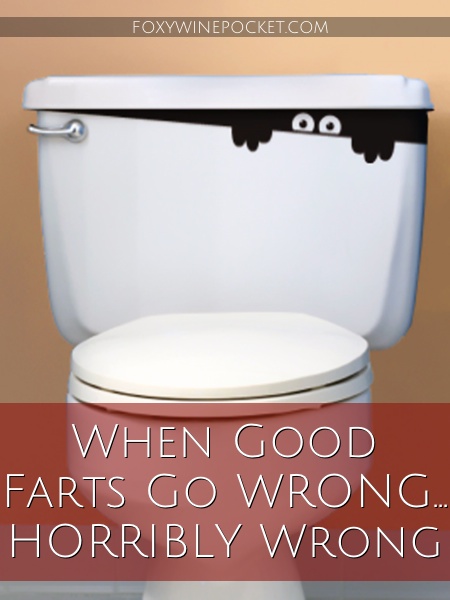 “Toilet humour” by brett jordan is licensed under CC BY 2.0. Cropped and added title graphic overlay.

My son Colin loves to fart. He always has. Farts make him giggle hysterically. He loves the noise that they make and the way it grosses out his sister. He loves the way it makes his parents burst out laughing. (I’m sorry, but little boys farting is so hilarious. When does that stop being funny?)

Once he was out of diapers, he delighted in the fact that the sound of his farts was not muffled. He could make his butt cheeks vibrate and amplify the sound by sitting on wooden chairs. There was no more padding to cushion the blow. His farts became louder, more forceful, and more abundant. In short, he became a four-year-old farting machine.

And this is where my horror story begins.

It started with Colin having a farting mishap. The kind of mishap where he thought that he was going to simply fart and then, all of a sudden, he was sitting in warm, squishy underpants. (Note: this has never, ever happened to me. I’m talking about my son here.)

He had done this a few times. Each time I refrained from calling it a “shart” and casually advised him, “You need to learn the difference between a fart and a poop, Son.”  He would nod, change his underwear, present me with his butt and underwear to clean, and get on with his day.

I was not thrilled with the whole thing, but I was so happy that he was out of diapers. And it didn’t happen all that often so I decided I could deal with the occasional farting mishap. No problem…

…until that one horrifying day.

He came into the kitchen to report that he’d had another “farting mistake.” I held back a curse word, forced a sympathetic smile, and told him, “We all have accidents. Let’s go clean up.”

We went into the bathroom, and I directed him to the toilet so he could finish whatever it was that he clearly needed to finish while I cleaned his underwear and pants in the sink.

As I was scrubbing and he was sitting, without any warning, he sneezed, and a **HUGE** booger on an eNORmously thick and bouncy string of snot shot out of his nose. It just torpedoed from the nostril and hung precariously down his panic-stricken face.

Now I’ve had some pretty disgusting jobs in my life, and I can handle a lot of gross things. But, honestly, mucus pushes me to my limits. And this mucus was like no mucus I had ever seen before. This was super-charged mucus wearing a tiny mucus villain outfit on an evil mucus mission from hell. 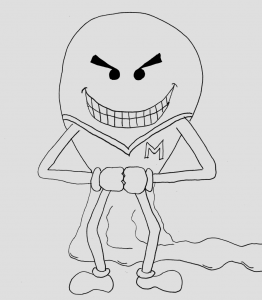 The evil villain, Mucusman. Stay clear of him. (Illustration courtesy of Mr. Foxy.) Be grateful this is the only picture I am including in this post.

But this was my child, and I could not show fear. I went in.

It was like a slow-motion scene from a movie: In the span of a few seconds, I dropped his soapy clothes in the sink, grabbed a tissue, reached over to get the foul mess, and said, “Colin, I’ll get…” just as the entire hanging mess of mucus—booger and all—accidentally got inhaled right INTO COLIN’S MOUTH.

Time stopped. Our eyes locked, and we exchanged a silent, “What the FUCKITY-FUCK?!” (Okay, that might have been me. But my son conveyed the little boy equivalent.)

And then, immediately, my son began to gag. I knew precisely what was coming. Like a ninja, with one hand, I grabbed the wastebasket from the ground (my other hand was still grasping the tissue) and shoved it in front of his face. Just. In. Time. My son immediately puked the ginormous glob of snot and mucus—and his entire breakfast—into the wastebasket. All of this—all of it—while he was pooping on the toilet. A trifecta of bodily fluids. If it hadn’t been so repulsive, I would have said it was a beautifully choreographed piece of performance art.

Heart racing, I looked at Colin who was staring back at me with a betrayed look in his eyes like, “Mom. You never prepared me for this scenario.” And I was shaking my head slowly, trying to catch my breath, thinking, “I better get something shiny from my husband for this one. This was NOT in the potty training handbooks.”

We both walked out of that bathroom despondent and wounded. We were different people—scarred from the epic battle in which we had fought.

Once I recovered enough to function, I knew I needed to address the real issue. Colin and I had a long discussion about when to trust a fart. And when not to. The difference between air pressure and the pressure from a solid mass. But this is a difficult skill to master when you’re only four years old, and we even had a few more accidents during the actual training course. I eventually threw my hands in the air and said, “Just go sit on the toilet every time you need to fart.”

Fortunately for me, he quickly learned to love the loud sounds and reverberations that a fart makes… in the toilet bowl.

P.S. Sadly, my son and I are no strangers to bathroom mishaps. I laugh about it now, but I wasn’t when my son announced to the world that I was pooping.