At the beginning of May, One Funny Motha and I both put on our inappropriate (pussy) pants, and we asked you to vote on who wore them better. She won on her site, and I won on mine (I love you, readers!). So we’ll just call it a draw.

Actually, scratch that. I’m going to declare us ALL winners! Because not only did you get to see us looking absolutely ridiculous in our inappropriate pants, but we seem to have started a movement: a pussy pants movement. 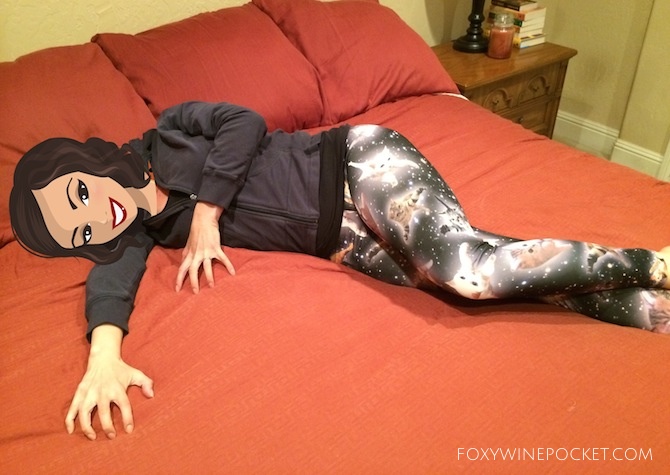 This is me, starting a movement. Also simultaneously paying homage to Baby Sideburns.

Ladies and, well, the one dude who reads my blog. (Okay, it’s Mr. Foxy.) But attention all you fabulous people: I present you with a Pussy Pants Parade. And yes, that is as exciting as it sounds.

First things first. Parades need music. So make sure to have this song playing in the background while you scroll down the page. Trust me. You won’t be disappointed.

Up first in our parade is an amazing picture sent to me by my dear friend Birdie.  She stealthily captured the elusive space kitties out in the wild at a liquor store in San Francisco.  What do space kitties drink?  Katlua, of course. 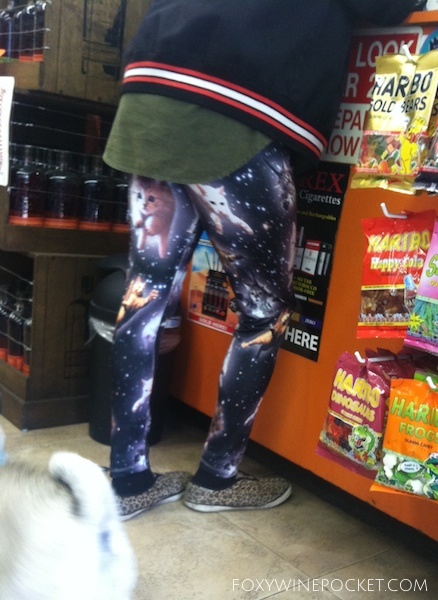 I appreciate the casual but sturdy look of the oxford shirt and derby jacket she paired with the leggings. And she even added a touch of feminine finesse with the animal print shoes. Take a close look at them—purrfection! Even Birdie’s dog wants to get in on that action.

Next up in our feline festivities, my freighbor* spotted this fine ensemble in our local Starbucks. The young woman (gawd, I’m now saying “young woman” so I must be old) happily allowed my freighbor to snap the photo. Perhaps she ordered a..catpuccino? 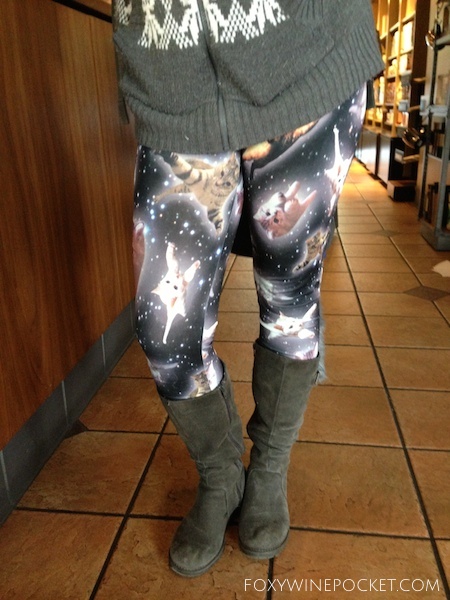 Next in our parade of ridiculousness, is THIS SHIRT, which I saw at the airport. I don’t know if this qualifies as a space kitty or a spaced kitty. Regardless, I. WANT. ONE. How do I not have one already?! It would go perfectly with my leggings and show the world what a fierce beast I am. 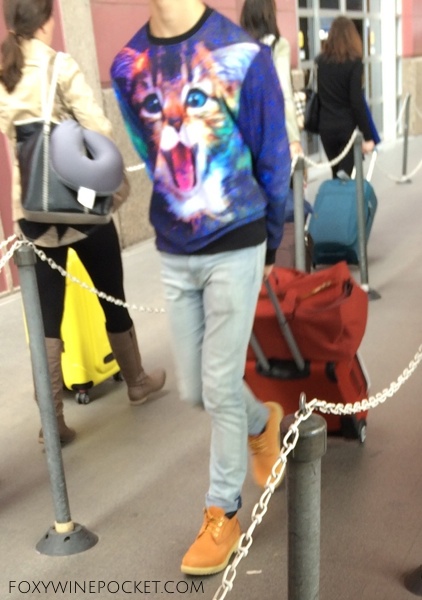 It takes a confident man to wear a shirt this ridiculous with skinny jeans. Or maybe he’s just a hipster.

And then, just when I thought the pussy pants pandemonium couldn’t get any better, some of my blogging friends joined in on the fun.

Here we have the lovely Jessica from Herd Management sporting her recently procured pussy pants. I love the simplicity of her t-shirt with the leggings, but I’m still trying to figure out what’s on her television. Some kind of sporting event? A dance competition?  Cheerleaders?  Is Jessica doing a space kitty cheer?! 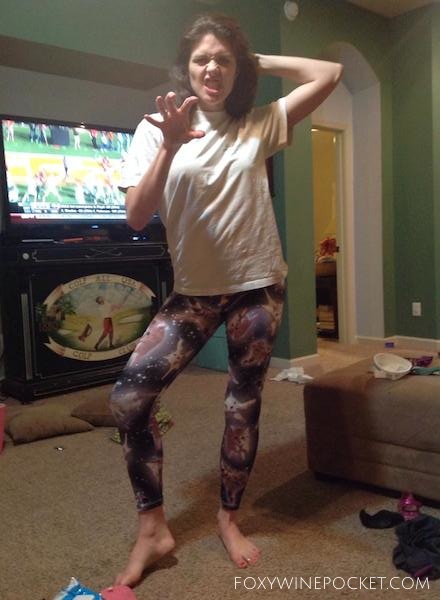 Jessica is just plain fierce. And not afraid to show her face. Watch out for her!

Bringing up the rear in our pussy pants parade (literally) is the fabulous and beautiful Sarah from Yoga Pants Mafia. She originally sent me a crotch shot, but wisely rethought that. (You can only imagine the horrifying search terms that are leading people to these posts. And then they are terribly disappointed when they find posts like this one, I’m sure.) We don’t need to make it any worse. Oops. I guess I just did. 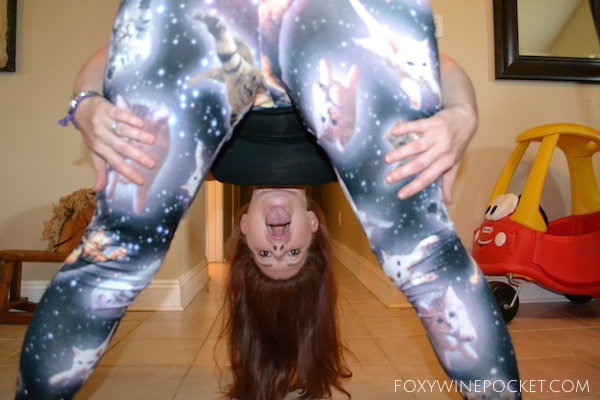 Okay. This really isn’t much better than a crotch shot. But it’s a fantastic photo! Thanks Sarah! Even the Little Tykes car looks impressed.

The most exciting part about all this space kitty craziness is that all four of us bloggers are bringing our inappropriate pants to BlogU this weekend! We’re going to learn how to be better bloggers (I sure hope they don’t tell us not to do pussy pants parade posts…) and hang out in our inappropriate pants during our down time. I’m sure there will be plenty of ridiculous antics documented. So stay tuned…

* freigh·bor [frey-ber] noun 1. a person who lives near another, and ends up being a dear friend.