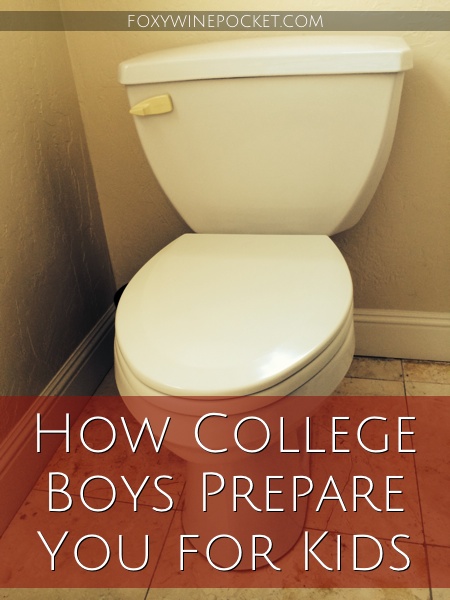 During my late college years, my boyfriend’s best friend, Paul, stayed with me and my boyfriend for the weekend. Now, I was not Paul’s biggest fan. I called him Eddie Haskell (behind his back) because he was very polite in front of the parents but a complete shit-head when parental units weren’t around. He was definitely more of a guy’s-guy and was always doing stupid boy things (making rude sounds, making rude comments, making rude gestures, etc., which ironically all sound like fun things now) and monopolizing my boyfriend’s time. He also cheated on his girlfriend. And I don’t like cheaters. But he was my boyfriend’s best friend so there wasn’t much I could do.

Anyhow, Paul came up for the weekend, and he and my boyfriend bought a case of beer to celebrate being young, obnoxious, and boy-ish. They bought the case for the whole weekend. (Yes, we were all light-weights, but none of us had kids yet.) They both got completely shit-faced the very first night. They were being loud and obnoxious and rude the entire time. After enduring their stupidity for an hour or so, I rolled my eyes and retired to my bedroom. I read a book for a couple of hours and went to sleep long before their antics had subsided. (God. This is terrifying to realize that I was already an old lady in my early twenties.)

I woke up the next morning prepared to go to the library to work on my paper because I knew there would be no point in trying to stay home to do it. My boyfriend was sleeping very soundly, and the apartment was absolutely silent. I put on some clothes and went down the hall to use the bathroom, hoping to make a silent getaway before the boys woke back up to do more boy things.

I pushed on the bathroom door, but it wouldn’t budge more than a couple of inches. What the fuck did they do, I wondered, already getting angry. I was picturing some wet towels or dirty clothes on the floor, so I leaned into the door and forced my way into the bathroom.

Now, before I describe what I found, I should tell you that I grew up with four brothers and one sister, and all six of us shared one bathroom. Four stinky boys and all of their antics my entire life. I also worked multiple summers at a family camp cleaning bathrooms. (I cleaned more toilets in one summer than most people have cleaned their entire lives.) But nothing—nothing—prepared me for what I was about to walk into.

First, came the wall of stench. It was a force so powerful it almost knocked me to the ground. It was an unmistakable mixture of fecal matter and vomit that had been marinating in a small windowless bathroom for hours. An older, wiser me would have immediately turned around and walked out the door. But that young, indignant me needed to know exactly what offense had been committed. So I held my breath and forced myself to fully examine the crime scene.

And there was Paul. Passed out on the bathroom floor. (I had shoved his feet and lower legs back when I forced the door open.)  His crumpled pants and underwear were pushed down around his ankles. There was a long streak of brown going across the toilet seat, down the toilet bowl, and on to the floor. There was pepperoni pizza puke splattered all over the toilet lid and seat. And on the floor and the floor mat. And the side of the sink. And side of the bathtub. And on the walls. It was like someone had blown up an Italian dinner all over my bathroom. And all over Paul.

To cap off this lovely scene: there was a giant piece of shit on the floor a couple of inches away … from Paul’s bare, white, pimply ass.

I didn’t stay there very long, but it was long enough to surmise what happened. Seems Paul had too much to drink, made his way into the bathroom, and puked everywhere. Sometime in the middle of that puke-fest, he decided he needed to take a dump. So he turned around, pulled down his pants, and proceeded to do just that. Only this was interrupted by the need to puke again (mid-poop, mind you), so instead of grabbing a garbage can or something vaguely rational, he turned around to puke in (near, really) the toilet—all while still taking a shit. And, in the middle of all of this, he must have passed out.

I left the bathroom quickly and shut the door. I wrote a note and left the apartment as fast as I could. I used the complex bathroom and stayed at the library all day. These were the days before mobile phones so I didn’t check in with my boyfriend. I just stayed out of the apartment long enough to ensure I wasn’t going to be the one cleaning up that disaster. When I came home late that evening, the bathroom, though vaguely reeking of Italian shit-puke soup, was spotless. And my bathmat freshly washed. And Paul was nowhere to be found. Seems he was smart enough to not show his face to me again that day. My boyfriend and I didn’t speak of this. Ever.

So, why am I bringing up this so-disgusting-you’d-think-I’m-making-it-up-but-I’m-not-because-this-shit-happens-to-me-all-of-the-time memory? Because the scene in the bathroom post-Colin-bath last week reminded me of that day. Fortunately, there’s no vomit involved, but it appears he had some sort of pooping problem that ended up on the toilet and the floor and the bath. When I got there, he was half-naked on the bath mat trying to pull up his pajama pants.  (Don’t worry, he and the bath mat took another bath.) As I was cleaning up the mess, I thought about Paul—and about how his college antics made this parental chore seem much less daunting. And I was thankful to him for that. And that his bare white pimply ass was nowhere in sight.