Remember the book, “The Giving Tree” by Shel Silverstein? It’s a beautiful tale of the lifelong relationship between a boy and a tree. (I always choke up when reading it to my kids. No, really. I do.) Despite some interpretations, “The Giving Tree” is generally seen as a heart-warming story of unconditional love.

Well, the story I’m about to tell you is not one of those heart-warming stories.

It is the story of a horribly fucked-up tree called, “The Pooping Tree.” The Pooping Tree is a giant Sycamore in our parking strip (that’s the area in between the sidewalk and the street). And every year, during Pooping Season, bird shit falls from the tree like tears from a teenage girl. Pooping Season is basically late Winter to late Spring—from early February through early May. So that’s almost three months of continuous bird shit. 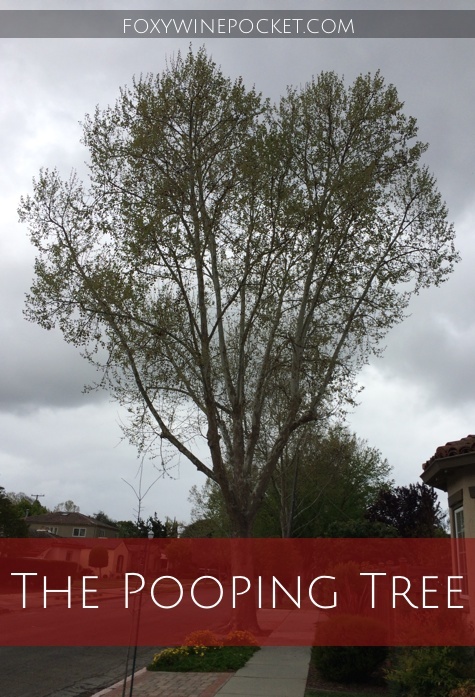 See the ominous dark clouds around the tree? A shit storm is brewing…

The tree is actually horrible all year round. The fuzzy balls (those two words always make me giggle) blow allergy-laden crap all over the house and yard. It’s like fuzzy shitty snow all over the grass. The amount of leaves it drops is un-fucking-believable. Even though I wait for the wind to blow a majority of the leaves down the street prior to raking, I still fill up the entire length of my house with piles and piles of leaves the entire Fall season. I hate this tree.

All that being said, during Pooping Season, the tree is at its very worst. Friends and family know to park across or down the street—anywhere but under that tree. We actually clean the garage every January so that we can park our cars in there. (California real estate is so ridiculous; most folks treat their garages as extra rooms.) In the middle of Pooping Season, the bird droppings actually sound like rain when they hit the ground. My husband was taking out the recycling last week, ran back inside, and said, “I’m not taking that out right now. It’s raining shit.” Indeed it was. 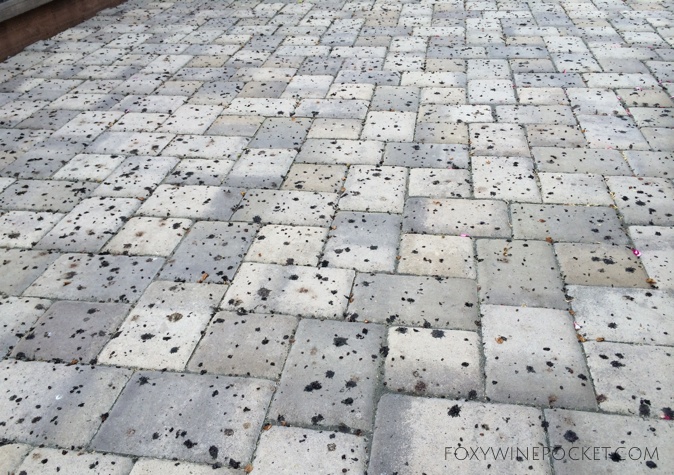 My friend, who is an Ornithologist (a bird specialist), came over during the first Pooping Season, briefly surveyed the neighborhood trees, and started laughing. “Yeah, it’s a mystery,” she said. “We don’t fully understand why the birds pick the trees they do. But they’ve definitely made yours the toilet tree.”

After our first full year living with this tree, I got a permit to trim the damn thing. See, given its location in the parking strip, it’s not actually my tree (it belongs to the city), but I have to pay for (and get a permit for) all trimming and maintenance. That year, I had the tree trimmer hack off as much as possible in the hopes that I could reduce the pooping range, but there are legal limits to what you can trim. And even though I kept screaming, “Take that fucker DOWN! MORE! MORE! MORE!” the arborist largely ignored me.

Of course, the tree grew back stronger and taller than ever. Desperate, I started trying natural bird scare tactics. I put a bobbly-headed owl in the yard. The birds don’t give a shit about the owl. (Actually, they give far too many shits.) They remain unafraid. 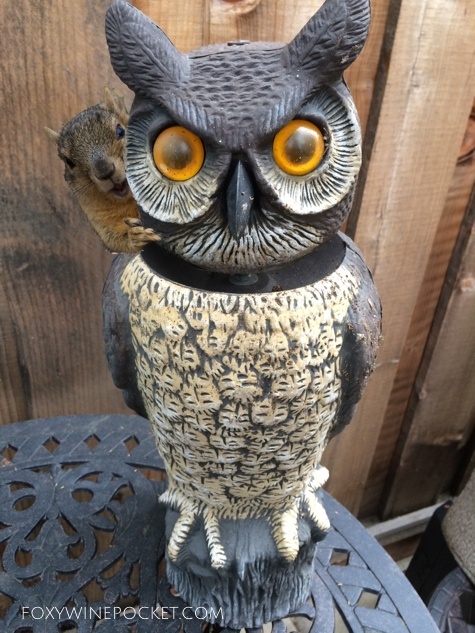 This owl isn’t fooling anyone. Hell, the squirrels dry hump it daily.

I have played recordings of predator sounds. But I don’t think the birds can hear the recordings over their squawking and shitting. And the recording started scaring the neighborhood children. So I had to stop.

Two years ago when a tree branch that was a good 16” in diameter was broken and dangling from the tree, I decided to take the “This Tree is Dangerous” approach.  I have a friend who is a federal forester, and he confirmed that this Sycamore has no business being on a residential street. I called the city arborist to explain that the tree is too big for our street and that it needed to be removed or it might kill someone. He came down, took one look at it, and told me, “Yeah. You can’t take it out yet. Call me in 10 years.”

So then I started my “Die, Tree, DIE!” campaign. Last year when I put in some new plants in the parking strip, I was having a problem with dogs killing them. So I put out this sign: 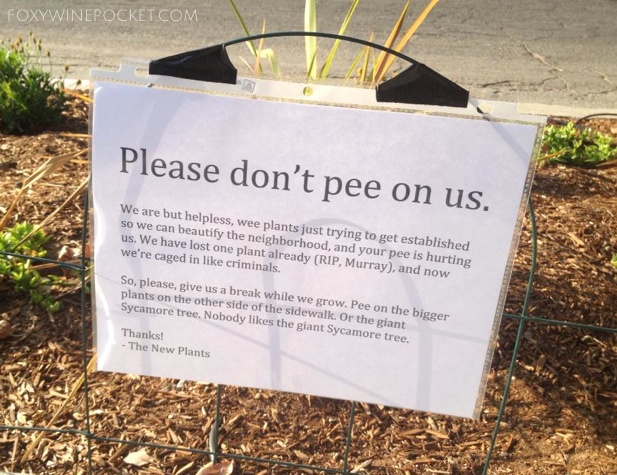 Come on. I dare you. Kill the Sycamore.

Sadly, the dogs just peed on the sign. Now my sign and the new plants are dead. And the nasty Sycamore lives on.

Actually, I guess the root of the problem isn’t my horrible tree. It’s the trees across the street that produce the berries that the birds eat and then fly to our toilet tree to poop all over the place. THOSE are the bastards we need to kill. 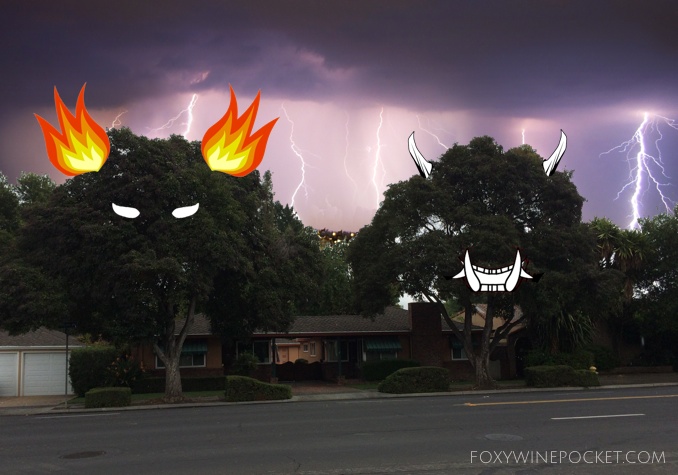 These are evil trees. If you kill them, I will love you forever. And gift you my bobbly-headed owl. You might have to scrape off some squirrel semen though.

Sadly, my husband, the tree hugger, is against tree murder. (I am too, I guess—except during Pooping Season.) So he won’t let me poison the evil trees. And apparently torching the trees is illegal and shit. Sigh…

(Ironically) our house is located close to a church so we get a fair amount of church parking every Sunday. And each Sunday during Pooping Season, the pious churchgoers get a horrible surprise after attending church services. 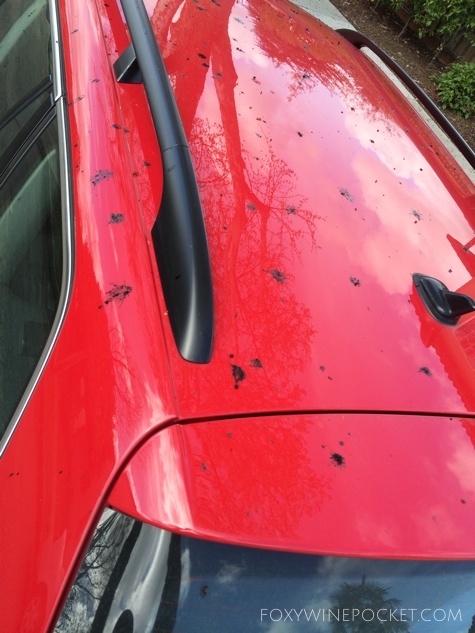 Here’s your reward for being a good Christian. (Note the Pooping Tree mocking me in the reflection.)

I actually feel bad for these people. I mean, they go to church presumably to better themselves and better the world, and then they literally get shit on. I feel so bad for them that I made another sign: 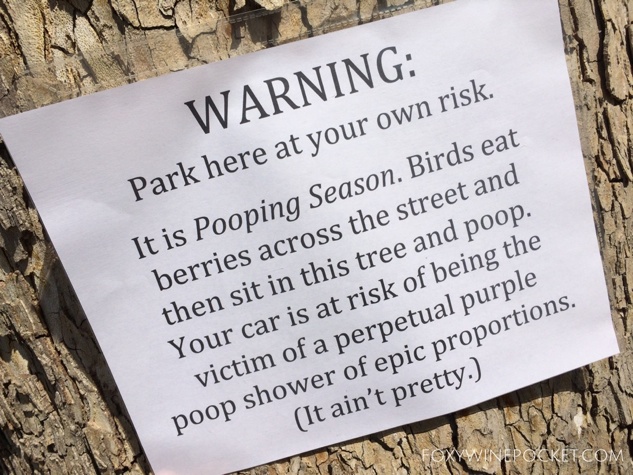 I totally got pooped on posting this sign. Bitches.

See? I’m nothing if not helpful.