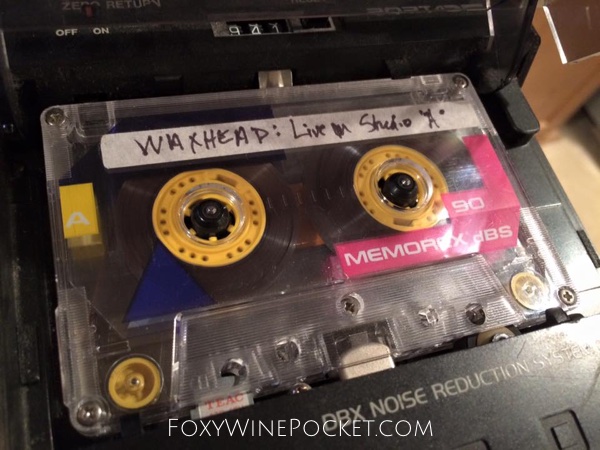 The first time I kissed Mr. Foxy, I immediately knew he was “the one.” Surreal and glittery and heart stopping, the moment our lips touched, I saw our entire future together, and it was warm and tingly. (I’m talking about the vision, not my lady parts.)

So what did I do after I discovered we were destined for each other? Well, I broke up with him. Naturally.

See, I started dating Mr. Foxy #waytoosoon after I had ended a long-term relationship. I knew I wasn’t ready for anything more than a rebound fling. But, goddammit, Mr. Foxy was so fucking adorable I just couldn’t not go out with him. So I did. Until it became abundantly clear that I needed to take some time away to deal with my shit.

It was a dark period in our (non)relationship. I was busy analyzing why my previous relationship failed (turns out we had vastly different emotional needs). And Mr. Foxy was busy waiting for me. He was (mostly) patient and even made me a mixtape to express every emotion he was feeling at the time.

Recently while cleaning my desk, I found said mixtape: 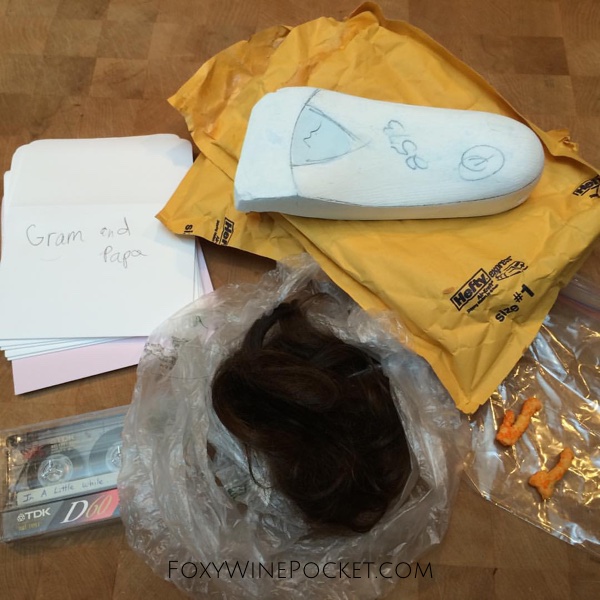 Among the treasures I unearthed that day: year-old unsent Thank You notes, plaster molds of my feet, pornographic looking Cheetos, a bag of hair I found in my daughter’s room, and the infamous mixtape from 1994.

The mixtape is titled “In a Little While…” and includes such beautiful (and not at all passive-aggressive) songs such as “Bad” by U2 (you know, the one about addiction) and “Black” by Pearl Jam (generally interpreted to be about unrequited love). Also featured are some slightly cheesy but ultimately straightforward and frozen-heart-melting songs like “The Last Worthless Evening” by Don Henley and “Don’t Let Him Steal Your Heart Away” by Phil Collins. 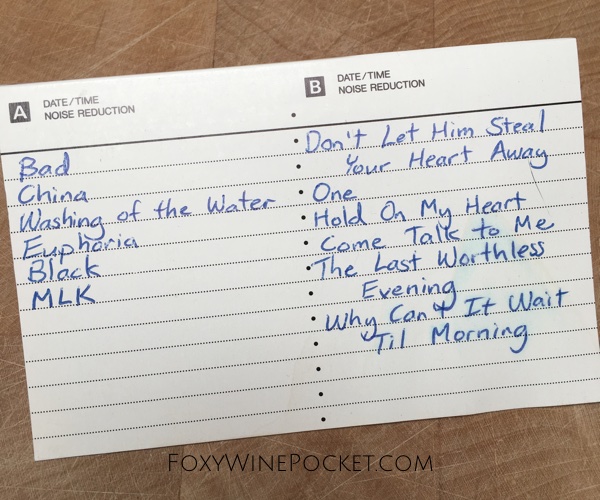 I think the smudged ink on the right might even be from tears.

The mixtape was truly inspired. An emotional masterpiece of sorts. And it worked (eventually). Mr. Foxy and I have been married for twenty years now.

Prior to that mixtape, I had only received one other. From an ex-boyfriend. Let’s call him John. John and I had (two) hot summer romances; neither of which endured. It was another case of incompatible needs. He needed to have sex. (I wouldn’t.) I needed him to be faithful. (He couldn’t.) I even walked in on him trying to get it on with another woman.

*jots down reminder to tell that story someday*

Anyhow, John made me his mixtape a year or two after our final breakup. I wasn’t interested in getting my heart broken a third time, and I wasn’t really into rock ballads at the time so I didn’t listen to it for a few years.

That was a mistake. Not because he could have won my heart back, but because that mixtape was sheer awesomeness. So awesome that Mr. Foxy and I were talking about it the other day while having a discussion about the best rock ballads of all time. I may or may not have been scream-singing those songs until Mr. Foxy took my beer bottle microphone away.

Unfortunately I couldn’t find the actual mixtape anywhere in my memory boxes, so I sent John a note to see if he remembered it. (Yes, we’re still friends. Well, “Facebook” friends; he’d probably hate me IRL.)

So random question for you. My friends and I were talking about the best rock ballads of all time. You made me an epic mix tape in about 1991 with some of my favorites. I can’t find the tape anywhere (which is weird because I keep everything) so I’m trying to remember the songs. Here’s what I remember (or have made up):
– Skid Row: I Remember You
– Tesla: Love Song
– Mötley Crüe: Without You
– Scorpions: Believe in Love
– Firehouse: Love of a Lifetime
– One other by White Lion or Whitestripes?
By any chance, do you remember what songs were on that tape? I realize that this is over 20 years ago, and you’ve probably long forgotten. But I thought I’d ask just in case.

Sadly—for all of us, really—John didn’t recall the specific songs. Perhaps he, like me, is too old to retrieve those details from the cracks in my memory. Or perhaps he purged our entire relationship from his brain.

Regardless, I applaud both him and Mr. Foxy for the genius employed in the making of their mixtapes. It’s challenging to tell a story with just a handful of songs. To communicate your subliminal (or overt, as it were) message. Honestly, I‘m not even sure which one I like better.

YOU: WHAT?! You crazy bitch! Obviously Mr. Foxy’s is better.
ME: Well, I mean, sure. Maybe. But 80s Power Ballads! The long hair! The tight pants! The pageantry!
YOU: Uhhh, Mr. Foxy made his while he was lovingly waiting for you TO GET YOUR SHIT TOGETHER. John’s was an apology for being a shit. Two summers in a row!
ME: I know, but have you actually listened to Without You lately? It’s A-MAZING.
YOU: But U2? Pearl Jam? Peter Gabriel?
ME: But Mötley Crüe? Oh! I know, I can sing it for you. And you can be the jaguar from the video and crawl around on the floor. Then you’ll know what I’m talking about. Just get me a bottle of beer.
YOU: Nevermind. You win.

Anyhow, because mixtapes are a lost art, I hereby declare it to be Mixtape Revival Month. For my part, I made a virtual mixtape for my friend Christine Organ. She and I worked on a (very frustrating) project together this past year. I love her dearly, and she puts up with my nonsense on the regular.

What’s on your mixtape?