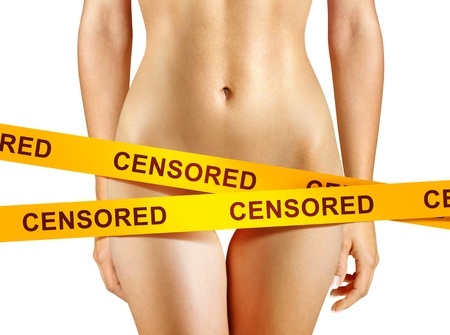 But my favorite “spice” is pubic hair art. That is, over the years, I’ve shaved various shapes into my pubic region: hearts, arrows, a martini glass, his initial, etc. (My God, I just realized that I’m an artist, and my medium is pubic hair.) If a particular piece doesn’t come out well, I just make it a Rorschach test, and we have great sex anyway.

(I will not be including any of those pictures with this post.)

For my husband’s last birthday, I decided to surprise him with a Brazilian. Now, I’ve never had a wax job on any part of me before, much less one where they remove everything from my hoo-ha. (I know, they don’t actually have to remove everything, but I figured go big or go home, right?) I decided that I could spare some hair in honor of my husband.

I didn’t think much of the whole process when I was scheduling the appointment, but honestly, I was a little nervous when the day came. When the technician arrived, I gave her a frightened look.

She then proceeded to explain the process and how she was going to remove the most sensitive hair first and then the rest of it. Then she moved the blanket.

“Oh. Uhhhhh, well, first we need to trim the hair back a bit. Quite a bit.”

I guess I had a forest going on there. I silently cursed my Italian grandmother. And the technician proceeded to trim my pubes with teeny tiny scissors (at least she didn’t have to get out a chainsaw), which actually tickled a bit. So I giggled and then got nervous about giggling over someone touching my pubic hair. Because it seemed vaguely inappropriate. (But it felt kinda nice.)

“Okay, now that we’ve trimmed the hair, I’m going to remove the most sensitive area first.”

“I’ve pushed out two kids. How hard can this be?” I pretended to be brave.

“HOLYMOTHEROFUCKINGSHITBALLSMOTHERFUCKER!!” I screamed in my head.

But what I uttered through clenched teeth was a weak, “I’m okay.”

And then she pressed her hand against my pubic bone (I assume to alleviate the pain).

“Harder! Harder! HARDERRRRR!” I screamed. Only that might have caused some more awkwardness.

After she threw me a weird glance, she assured me, “Well, that was the worst one. It gets easier from here.”

And it went like that for one fucking long session. Time became meaningless. I tried to concentrate on my breathing and not kicking her in the fucking face. Breathe in. Breathe out. Restrain foot. Repeat.

Fortunately, she was right. The first one was the worst. (But the rest sucked pretty hard too.) After removing all of my hair, she applied some sort of soothing salve. It had a name. I don’t remember it. I was kind a hoping for a massage. Or a cigarette.

1. After the technician left the room, I picked myself up off of the table. Actually I kind of slid off of the table in my own sweat. I walked over to the mirror to examine myself, and I was horrified. Not because I looked like a prepubescent girl (although that was slightly horrifying). I was horrified because it was at that moment that I realized that my pregnancy stretch marks went ALL THE WAY DOWN INTO MY TANTALIZING TRIANGLE. They looked like grotesque, greedy little fingers pointing the way down. Or lightening bolts threatening to strike any who enter.

Fortunately for me, my husband didn’t seem to notice the stretch marks. He was quite happy with the results. Also, he was too busy noticing that…

3… The hair started growing back, and I switched from ecstasy to agony. AGONY. Apparently—and no one warned me about this—I am not a good candidate for waxing. The itching, while annoying, was the least of my problems. Turns out that I am prone to ingrown hairs, and they hurt like a mofo. I started telling my husband I had boils and scurvy and bad, bad shit. I looked like a diseased slave from Game of Thrones. Not even a Dothraki would ravage me.

So, basically, I’m done with the Brazilians. Forever. I’ll stick to pubic hair art to spice things up.

I’m thinking about a chili pepper next. 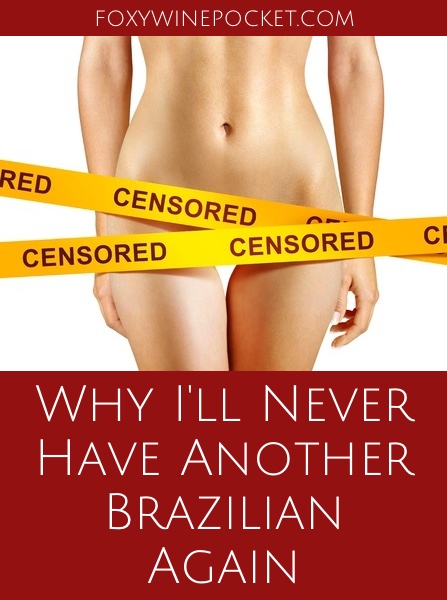