A couple of weeks ago, I shared a personal story about my own experiences with depression, anxiety, and PTSD on Megsanity. Books, Psychology, Sanity. And today I’m extremely excited to have Meghan O’Flynn here on my blog sharing some of her own wisdom.

Honestly, Meghan and I struggled a bit to find an appropriate topic for her to write about on Foxy Wine Pocket. After all, hers is a psychology blog with humor and mine is a humor blog… with psychological problems. But in case you haven’t noticed, I lean towards twisted and dark humor—so I asked her to “help me feel like I’m not an asshole when I use dark humor.”

It’s Good To Be Bad: The Psychological Benefit of Dark Humor by Meghan O’Flynn 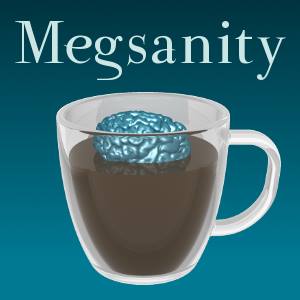 A beautiful woman is standing on an overpass, ready to leap to her death.
A homeless man approaches her and says “If you’re going to kill yourself, would you like to have sex first? It might be a fun way to go out.”
“No! That’s disgusting!” she screams.
The man turns and walks away.
“Wait, is that it?” she calls after him. “You don’t want to tell me that I shouldn’t do it? And where are you going so quickly?”
“I have to get down to the bottom,” he says. “If I hurry, you’ll still be warm.”

Humor has long been known for its ability to reduce stress and improve mood. Not only do we get to enjoy physical changes in heart rate and improved oxygen consumption while laughing, but after-giggle effects include slowed heart rate, lowered blood pressure and overall more mellow physiology(1). These benefits are likely due to changes in the endocrine system(2), and reductions in cortisol and epinephrine(3). It’s all about the chemicals. (I was going to tell you a joke about Jonestown here, but the punch line is too long.)

This stress hormone regulation thing might also explain why some people laugh during times of anxiety or grief, say at funerals, as their bodies try to find a way to calm down. But dark humor is a little bit different mostly because of how we perceive it. We often see people using nasty jokes as insensitive pricks, when in fact, they might be more sensitive to the very issues they joke about.

If a physician jokes about opening an abortion clinic called “Don’t Kid Yourself” it’s not a matter of being an insensitive asshole. I mean it could be, but it isn’t usually, just like your uncle Frank may or may not be a dick for holding out a turkey leg at every Thanksgiving dinner and yelling, “The leper told the prostitute to keep the tip!”

They might be insensitive, but they might not be. Because dark or gallows humor can also be a coping mechanism even more effective at long-term stress reduction than the clean jokes your grandma tells you.

Dark humor may be a type of cognitive behavioral strategy what serves a dual purpose of exposing individuals to the topics they fear the most along with those super awesome bodily calming effects. Journalists exposed to traumatic situations report using avoidance and black humor along with exercise and substance abuse to deal with the strain(4). And I’ll vote for jokes before drugs any day.

How many journalists does it take to change a lightbulb? Two. One to change it and another to shoot the editor.

Outside of journalism, this coping mechanism is especially common in those who have been through traumatic events and those in the helping professions, such as physicians, emergency responders and mental health professionals. Because while telling jokes is all well and good, knock knock bullshit won’t always make you forget the completely horrid and unfair struggles in store for the eight year old rape victim you just treated. Some days we want to pretend like the mother losing her child to cancer won’t be forever changed. A fireman needs a way to deal with pulling a body from flames never to be revived.

People want a reprieve. They need one. And by finding ways to bring humor into an event, even dark events, we find a way to lessen the blow.

And it’s not just for professionals. For those dealing with high anxiety levels, a joke about a dead prostitute might be more appealing than trying to deal with a miscarriage, or the death of a loved one. In this example, finding ways to joke about death with some distance in place (the prostitute as opposed to a parent) may help one to talk about the event in general, desensitize one to the subject matter and make the trauma easier to deal with when the time comes.

But they are not always funny to those not using them in this way. People tend to find jokes about immoral behaviors funny only if they are weakly connected to the moral being challenged or if they are otherwise distant from the actual subject matter(5). Context is important. Your blind uncle might not appreciate a Hellen Keller one liner. You can’t just walk up to an environmentalist and say shit like: “Wanna hear a joke? A baby seal walks into club…”

You can’t tell someone traumatized from their house burning down that they should seek additional support on the local burn ward because burn victims always tend to stick together. So seriously, don’t do that shit. Using dark humor to cope and being a total dick are not mutually exclusive. You can be doing both without realizing it. Use humor safely and kindly unless you know that the people around you are up to (or down to) the same level of prickly gallows humor you are. (Unless you’re a blogger, in which case you’ll probably get reamed no matter what you do. Ahem.)

It is hard sometimes (that’s what she said), but occasional inadvertent slips into inappropriateness are usually not intentional, nor are they completely avoidable without feeling censored. But even if those of us who use dark humor slip sometimes, we’re really not trying to hurt those around us. For many people, dark humor is simply a way to cope with the very real, very horrible things they go through every day. And professionals are not immune. We have to be able to sleep at night too.

So, if you’ll excuse me, I’m off to run a group meeting for compulsive shoplifters. I would tell jokes in there, but it’s hard to explain puns to kleptomaniacs. They always take things literally.

Meghan O’Flynn is a clinical therapist, writer, artist, wife, and mommy. She adores her amazing little boys, dark chocolate, tea, dirty jokes, and back rubs with no strings attached, in that order. She writes nasty psychological suspense novels and is amazed that her husband still agrees to live with her after reading them.