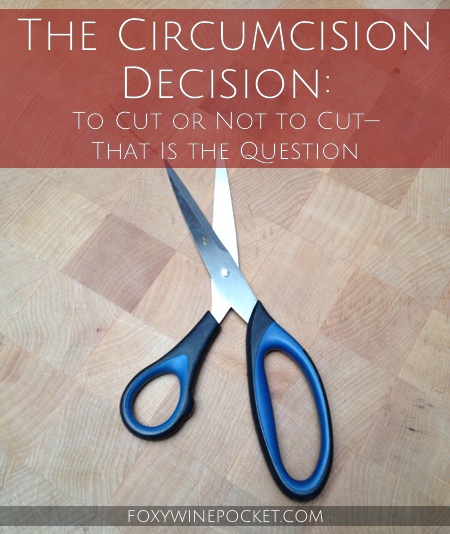 When I was pregnant with our first child—a girl—there weren’t many baby-making decisions for me and my husband to make, and the ones that we did have were quite easy. Selecting strollers and cribs and other supplies was free of drama. We opted for a gender-neutral nursery color scheme, thinking we’d save money in the event that our next child was a boy. (Okay, we knew we were too lazy to repaint.) We both agreed that our daughter should not be forced to wear pink just because she was a girl. (Of course, pink ended up being her favorite color for many years. I even wear it now too. Go figure.)

A few years later, when we found out that I was pregnant with a boy, we were just elated that he had a strong heartbeat and that the pregnancy was going well (we had lost two pregnancies in between). We didn’t think about anything else because we were so focused on keeping both the baby and me healthy and strong. Even selecting a name wasn’t a huge decision.

It wasn’t until we were in the third trimester of this pregnancy when our doctor asked us, “So, are you going to circumcise your son?” that we were confronted with our first huge baby-making decision. And one of the first times in our marriage where our points of view were diametrically opposed: The Circumcision Decision.

My husband and I answered the doctor simultaneously:

Me/Him: NO/Yes.
Doctor: *blink blink*
Doctor: Well, I don’t need to know right now. You two can talk about this and tell me your decision later. We still have a couple of months to go.

The car ride home from the doctor’s office started out in eerie silence. But I couldn’t shut up stay quiet for long.

It was clear that we weren’t going to get anywhere in the car. I sarcastically gently suggested that we talk about it at a later time. Which really just meant I was going to prepare all sorts of arguments on why we shouldn’t whack the weenie. Much like a lawyer preparing for her big summation.

We stayed away from the topic for about a week. I was slowly gathering all of my data. He was not.

Me: So, can we talk about circumcision again?
Him: Sure. I want to circumcise our son.
Me: But I don’t want to.

And then I went into all of my facts: It’s medically unnecessary. It’s like mutilation. It will take away some of his sensitivity.

That effectively ended that discussion on peeling the penis. A few more weeks passed. I was sticking to my principles and passive-aggressively leaving articles around the house: “Top 10 Reasons Not To Circumcise” and “The Barbaric History of Circumcision.” I was sure I was winning this big debate. Little did I know that my husband was also busy doing research of his own.

After a week or so, he brought up the topic again.

Him: Did you know that circumcision results in lower risks of urinary tract infections and sexually transmitted diseases? And cancer? IT LOWERS THE RISK OF CANCER!
Me: That’s actually not true. Didn’t you read the articles I put out?
Him: No. I recycled them all.
Me: Well, it’s not true. We just have to teach our son proper hygiene. He just needs to wash properly. There’s no reason to cut the cock.
Him (cringing): But what if other kids make fun of him?
Me: It’s actually getting more and more common not to circumcise. Besides, he can do it later if he really wants to. Remember that guy on Sex in the City?
Him: Oh my god, you are not comparing our son to a television character, are you?
Me (walking away): Hmmmpht.

And with that, we suspended talk of snipping the sausage. But we were running out of time. Our son was going to pop out of my body soon, and we really needed to make a decision.

Finally, a week or so before our son’s due date, we sat down and had an authentic heart-to-heart discussion. You know, like actual mature adults who aren’t planting Internet articles that support their opinions (or recycling those articles that don’t).

Him: So the way I see it, the pros and cons of circumcision cancel each other out. Honestly, at the end of the day, I want him to look like me. And I want that to be okay.
Me: I know you want our son to be like you, and that is an absolutely valid reason to circumcise him. I completely get that.
Him: Thank you for acknowledging that. And I know you want our son to be how he was created—to not alter his body.
Me: Yes.

Our son was born one week later, and we left him just the way he was created. We did not circumcise him. Which means that our son does not look the same “down there” as his dad. They are different in that way.

The other day while my son was taking a bath, I poked my head in and asked him, “Colin, have you pulled back the skin and washed your privates?”

He screamed at me, “NOOOOOO!”

I gently asked, “Why not?

And he screamed back at me, “BECAUSE I DON’T WANT TO TOUCH MY PENIS!”

I choked back a guffaw and thought, “Hmmmmm, maybe my son and my husband are different down there in two ways…”