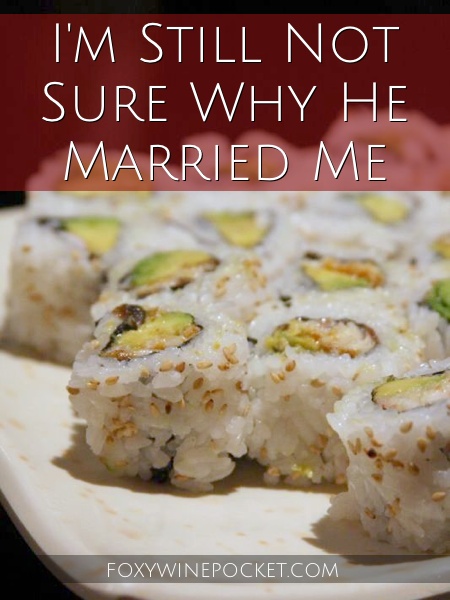 Here’s what he overlooked:

So we’ve established that I am was am was selfish, foolish, and arrogant. But he looked past those traits. Perhaps the most GLARING RED FLAG was waving the first time he made dinner for me.

At the time, I was in my early twenties and no culinary connoisseur. I was fairly adventurous though, and Mr. Foxy wanted to show me the world of sushi. He wanted to expand my horizons and open up my eyes to new cuisine. (You know he totally wanted to get lucky.)

Because he knew I had never tried sushi before, he opted to make California Rolls, the peanut-butter-and-jelly sandwich of the sushi world.

He went shopping at the nicest grocery store in town. He brought his own sushi rolling mat and other cooking supplies. He served me wine and put on music while he carefully made the seasoned rice and lovingly prepared all of the other ingredients.

And then he served me the most beautiful sushi I had ever seen (I had never seen sushi) and showed me how to dip and eat the pieces. I was gushing and smiling and tingling the entire time. Until I put that piece of sushi in my mouth and bit down.

I don’t know if it was the texture of the nori or the tang of the vinegar in the rice or the foreign combination of foods on my unrefined palate (I like sushi just fine now), but I couldn’t keep chewing. I bit down, and my mouth froze—as though I had bitten down on a piece of excrement. I fought back my gag reflex and tried my best to smile at this fabulous man.

“Well?” he asked expectantly. “What do you think? Do you love it?”

Here was this handsome guy in my kitchen trying so hard to impress the hell out of me, and all I could think was, “There is NO WAY IN HELL I can choke this shit down.”

So I didn’t. I bolted out of my chair, ran to my bathroom, and spit his beautiful sushi creation RIGHT INTO THE TOILET.

I unceremoniously flushed it down, rinsed out my mouth, and walked back to the kitchen.

And then he ordered a pizza and married me anyways.