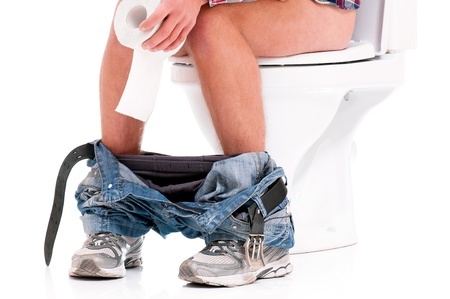 I often hear my fellow moms say they just want to go to the bathroom alone—that they want some privacy when nature calls. Honestly, I can’t really relate to this predicament at all. I’ve never had that wish.

Because I’ve never gone to the bathroom alone. Not in my entire life.

Growing up in a large family, I shared a bathroom with my five siblings. To speed up throughput, my mom installed saloon-style doors to separate the toilet and shower area from the sink and mirror area. (Genius move, if you ask me.) Still, while the doors may have created some visual privacy, they did nothing to dampen the, erm, sounds from the toilet. We heard everything going on with everybody. EVERYTHING.

It didn’t take long for me to realize that if I wanted any time in the bathroom truly to myself, I either had to get up really early or stay up really late. I’ve always prized sleep so neither one of those alternatives worked for me. Instead, I quickly learned to just let it go no matter who was nearby. Otherwise I would have suffered many an accident on the floor. Or my bowels would have exploded.

In high school I spent my summers living and working at a campground outside of Yosemite that had dormitory-style bathrooms. We were a little wilder and a little more free there, so no one really cared too much about privacy. One of my best friends and I even made up a bathroom song (based on a church tune, naturally) for when we were sitting next to each other in the stalls:

My pee is flowing like a river
Flowing out of you and me
Flowing out into the sewer
Setting all the bladders free.

(I’ll spare you the verse for poop.)

When I got to college, we had co-ed dormitories. Which also meant we had co-ed bathrooms, and a co-ed audience to any and all evacuations. There was literally no alternative to pooping within earshot of said co-ed audience, but unlike some people, I really wasn’t all that bothered by it. Honestly, it wasn’t much different than my house growing up. And I wasn’t about to miss my window of opportunity by holding it in.

This philosophy continued into my adult years. When my husband and I were still dating, we took a trip up to Lake Tahoe with some friends. After indulging in too many bacon-wrapped filet mignons at the casino buffet, I excused myself to use the toilet. As the liquid horror poured from my ass, a sound like someone angrily kick-starting a Harley Davidson echoed throughout the bathroom. The other women in the vicinity were effectively silenced. I didn’t really care, but clearly I was making them uncomfortable, so I started flushing the toilet every time an eruption occurred.

Outside of the facilities, my husband and his friend waited for me as a line of appalled women walked out of the bathroom.

These are things I’m used to, folks. My poor husband, however, was not.

When we got married, there wasn’t any privacy in our one-bathroom apartment. This didn’t faze me, but my husband had some trouble adjusting.

Our cats learned quickly that someone in the bathroom was stationary and available for head scratches.  They would come in to get their fill. They had no pride. They didn’t care if I was shit-petting them.

And once we got dogs, there was a whole new level of interaction in the bathroom. Dogs are like “OH HEY! What you doing?” “OH HEY! What’s that smell?” “OH HEY! Did you step on a frog?” They even learned to bring me the ball so we could play fetch from the toilet.

So when I had kids, it was no big deal to take them with me into the bathroom. Or to have them come in because they wanted to hang out.  I’ve signed report cards on the toilet. I’ve put on my son’s neck gear. (Don’t worry: this was pre-wiping, folks. I’m not unsanitary.) I’ve had deep discussions about which boys at school are cute, and I’ve helped my daughter pick out which shoes go best with her outfit. I’m not saying that I love doing this with my kids around, but I’m used to it.

Because I’ve gotten so used to animals and kids being with me in the bathroom, I just leave the bathroom door open all the time. (Personal energy conservation. Seriously.) So this happens a lot:

Husband (walking into the bedroom): “Where’s the [insert any easily located item from my house]? Oh, sorry. You’re on the toilet.”
Me: “No problem. It’s in the…”
Husband: “I’ll ask later. Close the door.”
Me: “What?! I’m only pooping.”
Husband: “Where’s the line, Foxy? CLOSE THE DOOR!”
Me: “EVERYBODY POOPS, Mr. Foxy.”
Husband: *walks away*

Honestly, I wish R.E.M. sang about that instead.

So we’ve established I’m pretty lackadaisical when it comes to pooping in front of other people. I even have an unofficial Poop Club with two of my friends in which we text each other after we’ve pooped. (I think I just broke the first rule of Poop Club.) We congratulate each other much like you might congratulate a child in the midst of potty-training. Sometimes we even send each other selfies while on the toilet. Yeah. I know. Not everyone gets it. My husband being one of them. He remains horrified by all discussions of pooping.

Don’t worry. I remember to close the bathroom door when company comes over. Most of the time.  I do know where the line is.

At least I thought I did.

Recently our street was having a block party. It was late in the evening, and I really had to pee.  Since our house is way down on the corner (and I’m super lazy, remember?), I asked my neighbor if I could use her bathroom. Naturally she said yes.

I went inside their house and over to the bathroom. I knocked softly on the door.  Nothing. I tried the handle. Unlocked. So I opened the door only to walk in on…

That article must have been very engrossing, because I guess he didn’t hear me knock. But he sure heard the door open.

“Uhhh, THIS IS OCCUPIED!” he stammered as I walked in the room.

And I turned around and left the bathroom faster than…well, as fast as someone who just walked in on her neighbor’s husband taking a shit. And I haven’t spoken to him since. Or looked him in the eye. Or read Popular Mechanics. (Not that I have ever read it in the first place.)

I guess we found our definitive line that day…but you know what? I can’t help but wonder if we could have avoided the whole mess had he kept the door open.