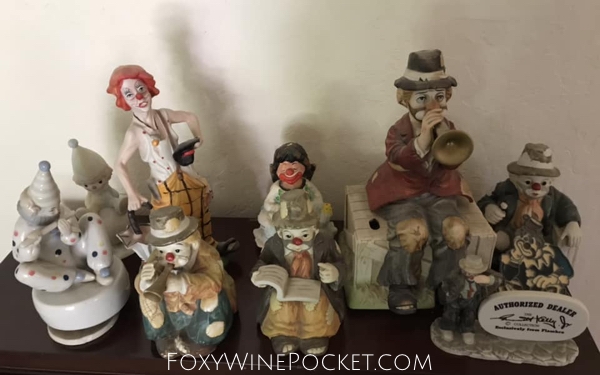 No, the answer isn’t “throw them in the dumpster.” Or “douse them with acid.” Or even “incinerate them in a funeral pyre.”

I mean, not when they’re your 100-year-old Aunt Ramona’s clowns.

No, that just won’t do them justice…

See, Aunt Ramona has always loved clowns, and she and my late Uncle Willie had a ridiculously obscene amount of fucked-up clown art (figurines, paintings, wall hangings, etc.) all throughout their house for many years. Their family room used to be a horrific shrine for the sadistic little shits. As a young child, I’d walk into the room, and those aberrations of nature would glare at me from all directions. I would cower in the corner trying to escape their wicked antics and visual assaults.

That display is directly responsible for my coulrophobia. Those nefarious fuckers freak the shit out of me. Like make me shake uncontrollably, chew off my fingernails, and weep. I don’t even like the “friendly” clowns at kids’ parties. (Who the fuck hires a clown for a kid party anyway?!)  You can add clowns to my random list of things that terrify me: heights, raw tomatoes, being grabbed around the ankles…

Shit. I digress. Back to Aunt Ramona. See, she is getting on in her years (don’t get me started—I’m not ready), and she wants to place many of her possessions before she goes, and I’ve been helping her do that. She’s especially been wanting to re-home her “precious” clown collection.

Here’s a typical conversation between us:

(These are exactly the kinds of conversations we have on the regular. She may be 100, but she’s seriously fucking awesome.) 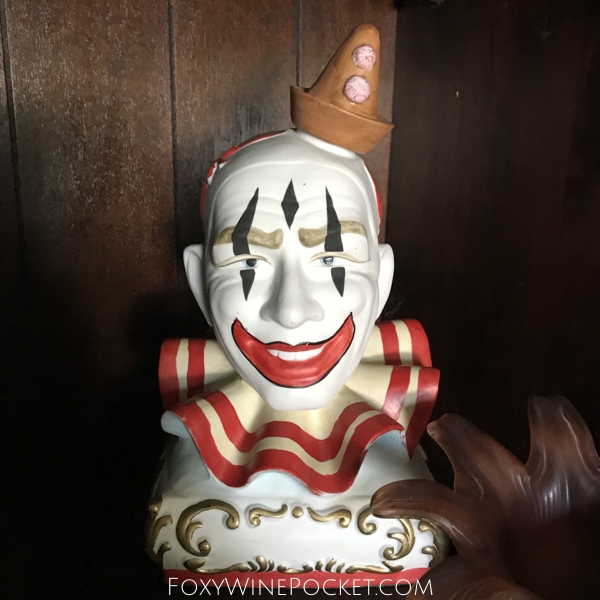 This one ended up in my home, and I’ve learned to embrace him. He’s whisper-screaming murderous plots and is full of 50-year-old whiskey because he was a bowling trophy Uncle Willie won. (It’s a toss-up which will kill you first: the clown or the whiskey.)

At Aunt Ramona’s 99th birthday party, I suggested we hand out clowns as party favors. She thought that was a fantastic idea, so I set up a table to display all the creatures and graciously offered them to guests throughout the party. Only, as you may have guessed, no one wanted the clowns. So there we were, stuck with a bunch of horrific clowns and no home for them. Aunt Ramona turned to me, “I guess I’m realizing people don’t like clowns so much anymore.”

Gawddammit, that tugged at my cold-dead heart. “You know what, Aunt Ramona? I have the perfect place for them. I’ll take them all.”

That made her soooooo happy. But me? Not so much.

I was seriously lacking a plan for the clowns. I couldn’t throw them away—I just couldn’t. They’ll forever remind me of my great aunt. (And they would probably haunt me from the dump.) I contemplated various options for displaying them: putting one in each kitchen cabinet, hiding them in people’s closets, lining the front pathway as a way to greet visitors. For a short time, one of them lived in the trunk of my car as a way to ward off would-be thieves. My daughter named him Jerry. Jerry the Trunk Clown. I kinda miss that little fucker.

During one anxiety-filled (due to no reason in particular) afternoon, I created the most spectacular Christmas display ever known to humankind. People, I sewed and hot glued and wept tears of joy. 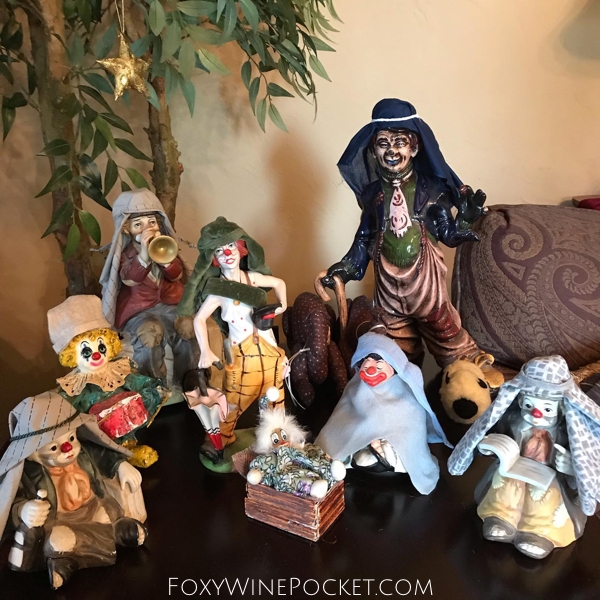 Just look at how happy they are! Smiling, boozing, making music, and shit. All in Clown Baby Jesus’s honor. Doesn’t Clown Mary look so peaceful? Look at her smile! And, Clown Joseph, with his umbrella? He’s ready for any storm. Or battle, depending upon the circumstances. I guess the Clown Shepherd is a little tall, but you need tall shepherds to deal with the flocks of clown animals. They’re sketchy AF.

LOOK, even the Little Drummer Clown Boy is there, playing on his instrument filled with bloody hearts. 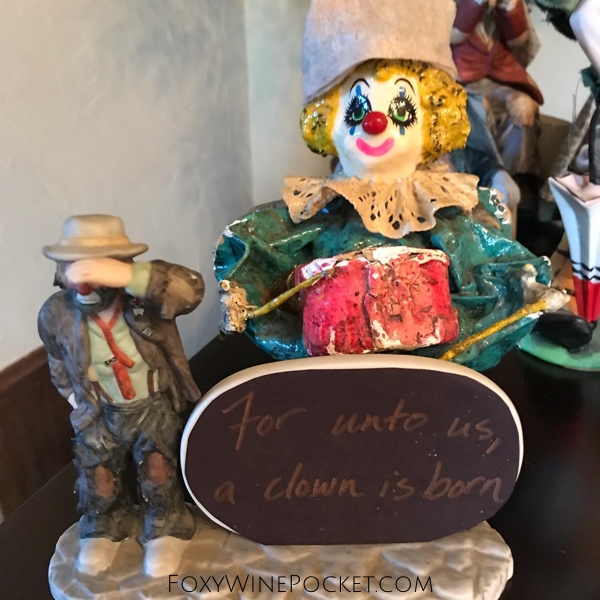 YOU GUYS. It’s like Christmas in July! Or is it August? Time has no meaning anymore. I’m just gonna drink some Murder Clown whiskey. Cheers!

ETA: Guess what? I made this nativity scene EVENMOREAWESOME.